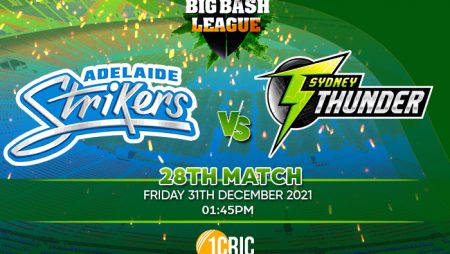 Adelaide Strikers vs Sydney Thunder: The Adelaide Strikers were never projected to win the tournament when it began, but they were also not supposed to finish towards the bottom of the standings. Despite having some of the game’s most stalwarts, the Strikers never achieved the kind of consistency that they had hoped for. They are presently in a difficult situation and will need to win a few games in a row to avoid relegation.

Sydney Thunder had been having a rather ordinary campaign until a couple of days ago, but their recent triumph over Perth Scorchers has signaled how deadly they can be on their day. Even though they are still in a precarious position in terms of the points table, they will be much more confident heading into their next match.

1.91 for Sydney Thunder to win the match

The new Covid-19 version has dealt the Big Bash League 2021 its first blow, with the match between Perth Scorchers and Melbourne Stars being rescheduled until later in the tournament. The remainder of the tournament is likely to proceed as planned, with some of the most thrilling matches coming up next.

The Adelaide Strikers will face the Sydney Thunder in the next round of the championship, in a match that will pit the two teams right on the cusp of the mid-point of the points table. The match will take place at the Adelaide Oval on Friday, December 31st.

Given the two teams’ respective positions on the ladder, this match is crucial for both. Sydney Thunder will move closer to the top of the table and clinch their place in the top four with a win. This victory is more about Strikers’ survival in the competition.

Both teams are expected to come out firing, ensuring that this will be a thrilling match. Given the two teams’ on-paper compositions and recent form, betting on the Sydney Thunder to win is the way to go.