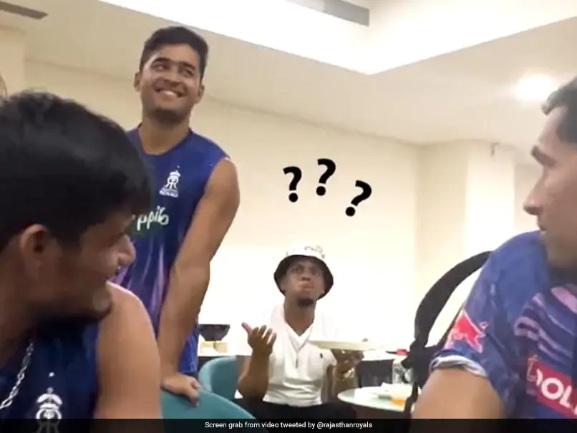 Shimron Hetmyer’s Priceless Reaction To Sanju Samson’s “Great Speech” Joke. Sanju Samson addressed his RR teammates and support staff following the conclusion of the IPL 2022. On Thursday, a snippet of the video was tweeted from the team’s Twitter account.

Rajasthan Royals wowed everyone by reaching the final of the IPL 2022 season thanks to some outstanding performances all around. They did not, however, make it past the final hurdle, losing to Gujarat Titans. Despite the disappointment of the final, the Rajasthan Royals had many reasons to be happy to be back home. Jos Buttler was awarded the Orange Cap, while Yuzvendra Chahal was awarded the Purple Cap. Aside from these two, there were numerous key contributions from a variety of players throughout the tournament that helped RR reach the final. Sanju Samson’s captaincy was also impressive.

Samson addressed his teammates and support staff following the conclusion of IPL 2022. On Thursday, a snippet of the video was tweeted from the Rajasthan Royals’ Twitter account.

“Honestly, thanks a lot to each and everyone. Thanks a lot for trusting in my decision making. I think, I might have made some bad decisions but some good decisions. I am definitely learning and growing as a leader as well. Thanks a lot Sanga (Kumar Sangakkara – Director of cricket, RR). I think a huge credit goes to Sanga for taking care of the group as a strong leader. The way you communicate through the ups and downs,” Samson says in the video.

“I think yes this season we had a lot of good happy memories but last season I know we were fighting for 7th and 8th position and I think the way you managed the team was really unbelievable. And I would like to thank each and every staff, the supporting staff, physios, masseurs, almost everyone actually.”

Also Visit: T20 Blast 2022: KEN vs SUR Match Prediction – Who will win the match between Kent and Surrey?

Samson then turns to face Hetmyer and thanks him, but not for his performance on the field.

“And, Hettie, thank you for eating that dinner while I give a fantastic speech.”

The entire room bursts out laughing as soon as Samson says these words, but one man is not smiling: Hetmyer. Even as his teammates look at him, the West Indian has a puzzled expression.

Samson then continues with his speech, thanking England’s Jos Buttler.

“Almost everyone from the top down — Manoj sir, Zubin sir, and many thanks to Jos. I think you had a fantastic season, and we all learned a lot from you “Samson added