In Dharamsala, Rohit Sharma Is Likely To Make A Significant Change To India’s Predicted XI For The Second Twenty20. 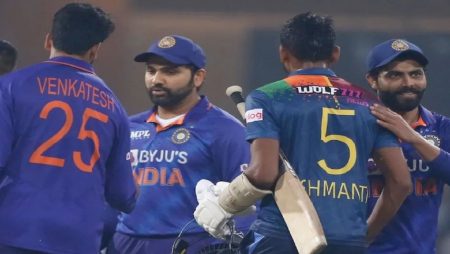 When the two teams meet in the second T20I of the three-match series on Saturday at the Himachal Pradesh Cricket Association Stadium in Dharamsala, India will be trying to win the series.

The Rohit Sharma-led Indian squad will try to take an unassailable 2-0 lead in the series after winning the first  T20I by 62 runs, with the final T20I being play just a day later at the same venue.

Ravi Bishnoi could replace veteran spinner Yuzvendra Chahal in the lineup. In the first T20I, India was brutal in both departments, and they would want to repeat the feat in the second match.

Our indian predicted India XI for the second T20I versus against Sri Lanka is as follows:

Owing to the absence of Ruturaj due to a wrist injury in the first T20I, Rohit return to the top of the order after returning to bat at No. 4 against the West Indies in the final T20I. Because Ruturaj has been rules out for the duration of the series, he is expect to reteam with Ishan at the top of the order.

Ishan finally found his night of reckoning and glory in the first T20I against Sri Lanka in Lucknow, after struggling to get going in the white-ball series against the West Indies. He scored an offensive 89 and will want to match, if not surpass, his performance on Saturday.

In the absence of Virat Kohli, Shreyas Iyer rose to the occasion, blasting a quick half-century after going in to bat at number three. He’ll almost certainly start both games in Dharamsala.

In Dharamsala, Rohit Sharma Is Likely To Make A Significant Change To India’s Predicted XI For The Second Twenty20.

Sanju Samson was not given the opportunity to bat since India’s top-order was on fire. In the second T20I, he hopes to see some action.

Venkatesh has made the most of the opportunities that have been present to him, both with the bat and with the ball. lyer grabbed two wickets after not being given the opportunity to bat, however he was a touch pricey.

Ravindra Jadeja’s return from injury was uneventful. In Lucknow, he took a crucial wicket of Dinesh Chandimal. He’ll try to create an even bigger impression, particularly with the bat.

Deepak made his T20I debut the other day, after earlier this month representing Team India in ODIs. He’ll also want to impress the management in order to earn a spot in the World Cup team.

Patel will be looking to make a larger mark after bowling just two overs and conceding 10 runs in the series opener. He’ll almost definitely remain a member of the squad.

Bhuvneshwar Kumar was India’s most effective bowler, taking two wickets in the opening three overs. He’ll be hoping for a repeat performance in the second T20I.

So far, Ravi Bishnoi’s performance in an Indian shirt has been excellent. After missing the first T20I, the youngster could get the nod over the seasoned Yuzvnedra Chahal.

Read This: Indian Players Sings Bollywood Song On Team Bus Ahead Of 2nd T20I vs Sri Lanka in Dharamsala

After resting for the West Indies series, Bumrah returned to action the other night. He did a good job of containing the hitters, but he didn’t get a wicket. In the second T20I, he’ll try to make amends.

Also Visit: The IPL 2022 League Phase will be held in four locations  in Mumbai and Pune, with  the  final on May 29.

One Reply to “In Dharamsala, Rohit Sharma Is Likely To Make A Significant Change To India’s Predicted XI For The Second Twenty20.”