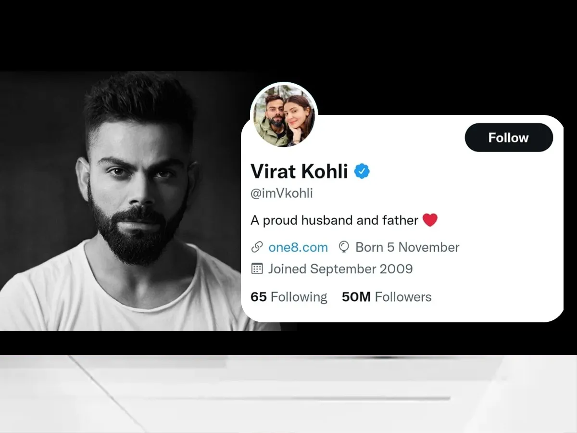 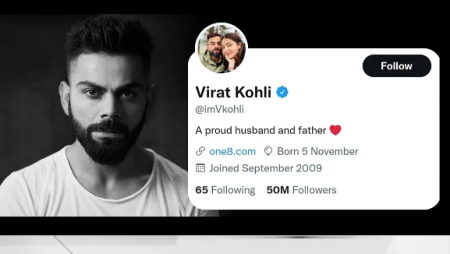 Virat Kohli added another feather to his already-encrusted cap by becoming the first cricketer to reach 50 million Twitter followers. Previously, he became the first Indian to reach 200 million Instagram followers. Making him the third-most followed athlete on the platform after footballers Cristiano Ronaldo and Lionel Messi.

The former India and Royal Challengers Bangalore captain returned to cricket. After a month off in preparation for the Asia Cup. Smashing an unbeaten 122 against Afghanistan in India’s final Asia Cup match. With 276 runs, he finished his campaign as India’s leading run-scorer and the tournament’s second-highest run-scorer overall.

Virat’s social media following was already large. But it skyrocketed after he scored his first T20I ton and announced his return to bigger plans in the 22-yard arena. He boasts 49 million Facebook fans, which helped him reach 310 million total social media followers, adding to his already astronomical numbers. This accomplishment would make other movie stars envious of his success.

Kohli stepped down as T20I captain to focus on his game, which had taken a different path a while ago. The 33-year-old gave it his all but failed to deliver a memorable performance. However, the Asia Cup 2022 completely altered the scenario. He began with a 35-run knock against Pakistan in the first game, and then went on to score two half-centuries in a row, one against Hong Kong and one against Pakistan.

After being dismissed for a duck against Sri Lanka, he came back stronger than ever to break all boundaries and overcome all obstacles in the game against Afghanistan. Kohli went on to bat alongside KL Rahul and score a 61-ball 122*. He batted steadily throughout the 20-overs and set several records with his first T20I century. He will now be seen in India’s home series against Australia and South Africa before beginning preparations for the T20 World Cup.

Also Read: Former captain names a pacer who should have been in India’s T20 World Cup squad.