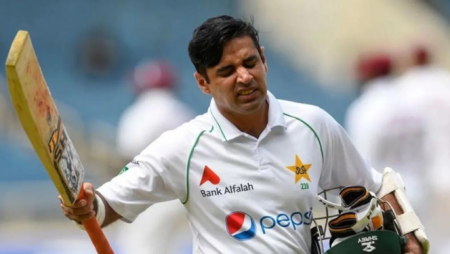 Abid Ali has represented Pakistan in 22 internationals in his limited playing time. Due to the fierce competition in the national team. Ali could only make his debut at the highest level in March 2019 at the age of 31. However, the Lahore cricketer’s career nearly cut short due to a serious heart condition.

Ali himself admitted that he thought his career was over after suffering a serious heart attack during the Quaid-e-Azam Trophy 2021/22 in December. He also thanked the Pakistan Cricket Board (PCB) doctors, PCB chairman Ramiz Raja, and NCA doctors for their assistance when he was not in the best of health.

Also Visit: Ian Bell emerges as the leading candidate for the ECB to restore the role of national selector.

I never imagined such a thing would happen: Abid Ali

“I’ve been in excruciating pain for the last 5-6 months. But thanks to Allah Almighty, I’m back to normal.” ” I never expect to be in this position. ” Abid Ali said in an interview with Cricket Pakistan.

“I’d like to thank the PCB and everyone who helped me, especially Ramiz Raja and the NCA doctors on the panel.” “I am also grateful to have a great team working with me and assisting me in the rehabilitation center,” he added.

At the same time, the right-handed batter state that he never imagine such an incident would occur and that when confront with this unexpected situation, he felt as if his career was over. Furthermore, the 34-year-old stated that he would remain optimistic and pray for a healthy and prosperous future.

Abid Ali complain of chest pains while playing in the Quaid-e-Azam Trophy last December and rushed to the hospital, where he was eventually diagnose with acute coronary syndrome. Fortunately, the cricketer’s angioplasty was successful.