Jos Buttler identifies one rule that should be included in the IPL 2022. 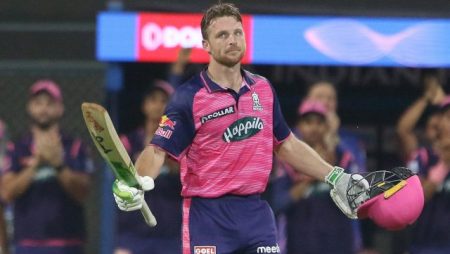 England and Rajasthan Royals (RR) batsman Jos Buttler has stated that if he were captain of a team that included Indian spinner Ravichandran Ashwin, he would not allow the veteran spinner to run-out any batter at the non-end. striker’s The English batter also shared his thoughts on one rule that he believes should be implemented in the Indian Premier League (IPL).

The 31-year-old has stated that if one of the teams is slow in terms of overrate. One extra fielder should be brought inside the 30-yard circle to give the batting team an advantage.

The explosive batter is currently leading the scoring charts in the 15th edition of the Indian Premier League (IPL), having amassed 491 runs in only seven matches, including three centuries.

He’s not going to listen to me: Jos Buttler on not allowing Ashwin to bat against Mankad.

Buttler ask about one rule from other T20 leagues that he would like to see in the IPL in an interview with ESPN Cricinfo, to which he replied. ” If you are slow in your overs, one of the extra fielders has to come in the (30-yard) circle.”

In another question, Buttler ask if he would allow Ashwin to Mankad a batter if he was captaining the team, to which he simply replied, ‘ No. ‘ The interviewer then asked him if Ashwin would follow his orders, to which Buttler responded with a slight smile and a firm ‘No.’

Meanwhile, RR beat Delhi Capitals to move to the top of the points table, thanks to Buttler’s century. In his destructive innings against Rishabh Pant and company, the right-handed batter was at his best, smashing 116 runs in just 65 balls, hammering nine fours and an equal number of maximums. RR have now won five of their seven matches and are tied for second place in the points table. Gujarat Titans (second) and Royal Challengers Bangalore (third).

Also Read: You must accept the umpire’s decision, whether it is good or bad: Shane Watson