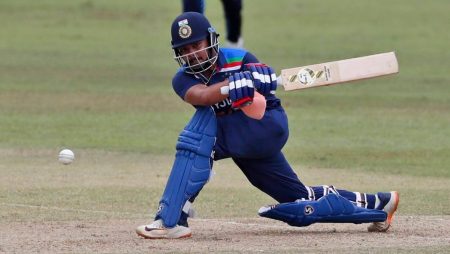 Team India’s opening pair options, according to Deep Dasgupta. ‘The way he starts, he may not give you 70s, 80s, or hundreds. But he can give you a brisk start,’ Dasgupta explained.

In the months leading up to this year’s World T20 in Australia, India experimented with various opening permutations and combinations. For the current T20I series against the West Indies, Suryakumar Yadav promoted to the top spot alongside Rohit Sharma. Meanwhile, former India player Deep Dasgupta believes that Prithvi Shaw can be use as a backup opener.

Rahul Dravid, the team’s head coach, will focus on selecting the best lineup and assigning each player a specific role, especially with the mega event less than three months away. The preferred openers are probably Rohit and KL Rahul, but Deep Dasgupta has thrown in a new name.

Dasgupta believes that the selectors should consider Prithvi Shaw as a backup opener.

“My first choice [for the T20 World Cup] would be KL Rahul and Rohit Sharma.” As a third opener, consider Prithvi Shaw, who has done exceptionally well in that position and brings a unique skill set to the table. He might not give you 70s, 80s, or hundreds the way he starts, but he can get you off to a fast start. If you look at the internationals, Ishan (Kishan) has done well. “He starts well but has lost his mojo in the last few games,” Dasgupta said to CricTracker.

Also Visit: Sikandar Raza speaks out after recovering from a bone marrow infection.

There are numerous wicketkeepers who are also excellent batter: Deep Dasgupta

Dinesh Karthik has risen to prominence in the current T20 lineup as a result of his heroics in the final few overs of the innings. On current form, the senior batter may even outperform Rishabh Pant, but Dasgupta believes India could fit three wicketkeepers in the playing XI, with KL Rahul as the opener, Pant in the middle order, and Karthik as the finisher.

“There are a lot of wicketkeepers who can also bat.” They can function as batters as well as keeper-batters. Dinesh Karthik, Ishan Kishan, Rishabh Pant, KL Rahul I believe there are several options. I’m also looking at them from a batting standpoint. In such a case, you should include 2-3 wicket-keepers in your playing XI. KL Rahul as an opener, Rishabh Pant in the middle order, and Dinesh Karthik as a finisher, for example,” Dasgupta added.