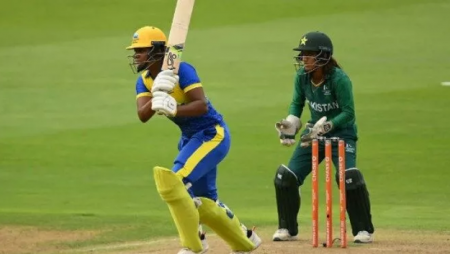 Nida Dar’s efforts are futile as Barbados defeats Pakistan. Pakistan’s fate in the tournament will be decided in their next match, which will be a blockbuster against India.

Barbados defeated Pakistan by 15 runs in the second match of the Women’s tournament at the Commonwealth Games 2022 on Friday, July 29th, at Edgbaston. After batting first in the match, Hayley Matthews’ Caribbean Islands team set Pakistan a target of 145 runs.

Pakistan, chasing a par score, got off to a bad start when they lost opener Iram Javed on the first ball of the second innings. The subcontinental team never threatened the Barbados bowlers and were four down before the 50-run mark. Pakistani skipper Bismah Maroof was the fourth wicket, adding to her team’s woes with a dismal 12 off 28 deliveries.

Maroof’s team appeared to be out of the game before the halfway point in the second innings, but veteran all-rounder Nida Dar came to the fore with her team in troubled waters and recorded a counterattacking half-century off just 31 deliveries. Dar’s blitz reintroduced the Asian team into the chase, but she never received the necessary support from the other end and eventually fell 15 runs short of the target.

Hayley Matthews was the pick of the Barbados bowlers, returning with economical figures of 1/13 in four overs. Shamilia Connell, Aaliyah Alleyne, and Deandra Dottin each had a wicket.

Also Visit: Sourav Ganguly will return to the field and play in a charity game of Legends League Cricket.

Earlier in the innings, Pakistan won the toss and chose to bat first against Barbados. Hayley Matthew’s side lost volatile opener Deandra Dottin cheaply in the first over and needed to consolidate, which they did, with the skipper stitching a 107-run second-wicket stand with Kycia Knight. The pair each scored half-centuries as Barbados finished with 144/4, failing to capitalize on the experienced pair’s start.

Fatima Sana’s four overs were costly, conceding 41 runs but picking up two crucial wickets for Pakistan. Diana Baig also added a wicket to her tally. Pakistan will now face India in a tense match on Friday that will determine the fate of the teams in the competition.

Also Read: K Srikkanth is upset with Rahul Dravid for not including Deepak Hooda in the first WI T20I.