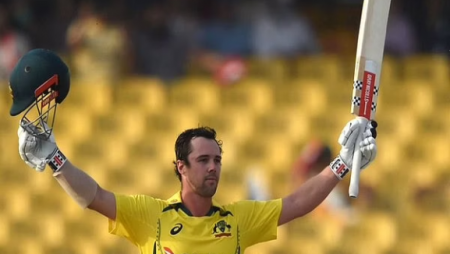 Travis Head Explains Why He Doesn’t Expect To Play In The ODIs Against Sri Lanka. Beginning June 7, Sri Lanka will host Australia for three T20Is, five ODIs, and two Tests.

Beginning June 7, Sri Lanka and Australia will play three T20Is, five ODIs, and two Tests. The tour will begin with the T2OI series. Australia’s left-handed batter Travis Head has revealed why he does not expect to be in the playing XI for the ODIs ahead of the matches. Head is realistic about his chances because David Warner will be back to partner skipper Aaron Finch at the top.

Head opened the ODI series against Pakistan while Warner rested. That series, the left-handed batter finished as Australia’s second-highest run-scorer.

Also Visit: Gary Kirsten calls Ashish Nehra “tactically one of the best coaches in the IPL.”

“It means I’m unlikely to begin (in the ODI series). I’m realistic in that Davey (Warner) and Finchy are back together at the top of the order, and then there’s a middle-order that’s so entrenched on that side that it’s difficult to break into “Cricket.com.au was informed by Head.

“I think the plan is to see how things go for the first couple of ODIs and, if the opportunity isn’t quite there and a spot doesn’t open up, then there’s a chance for me to play in the second Australia A (four-day) game and focus on the Test series,” he added.

Head has opened for Australia in 15 innings, scoring 683 runs at a 45.53 average with two centuries and five half-centuries.

“I’m probably the unfortunate one right now who is just out of that ODI starting XI, but it’s great to be back in the squad and I hope I’ve been able to force the selectors hand a little bit over the last 18 months or so with domestic form and then in Pakistan,” said Head.

“I’ll keep banging on the door, and that’s really all you can do,” he added.

The T20I series between Australia and Sri Lanka ends on June 11, and the ODI series begins on June 14 in Pallekele.