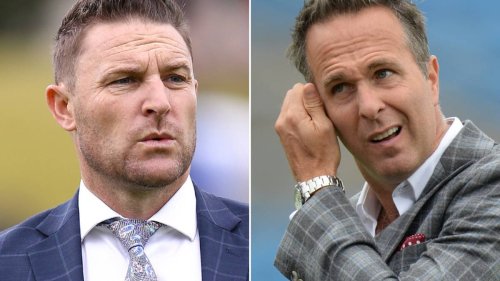 England’s bold selection of Brendon McCullum makes me nervous: Michael Vaughan. Vaughan, on the other hand, believes that McCullum’s appointment will be called into question if he does not receive results quickly.

The England and Wales Cricket Board (ECB) announced the appointment of Brendon McCullum as England’s Test team coach on Thursday. The 41-year-old, who is currently with the Kolkata Knight Riders in the Indian Premier League. Chosen unanimously by the board, and his first appearance with the team will be in the upcoming home series against New Zealand.

Vaughan dissatisfied with McCullum’s selection over Kirsten, believing that the team would have been in better hands under Kirsten’s leadership. “Brendon McCullum’s bold appointment by England makes me nervous.” If English cricket has overlooked someone like Gary Kirsten for the second time, it is extremely strange. “I don’t see how we could have made that decision twice,” he wrote in his Telegraph column.

Also Raed: Yuzvendra Chahal of RR takes on Jos Buttler in the nets in a hilarious battle ahead of the LSG game.

England’s bold selection: One thing is certain, we are in for an exciting ride: Michael Vaughan

Michael Vaughan praised Kirsten and his experience in the role, stating that he would have been a good fit for the England job. He also stated that, at a time when England’s Test performance has been disastrous, giving the responsibility to someone more experienced would have been better for the ECB.

“He is the ideal mentor, thinker, and culture driver who has done it all before and has the t-shirt to prove it.” What England has done with Brendon is exciting and a big name, but it is also a big risk. He’s taking over England just in time. “They’ve been at their lowest point since the mid-1990s,” he adds.

“He won’t have to do much for us to see a massive improvement, but if it doesn’t happen soon, questions will be raised about his appointment and whether England would have been better off with a safer pair of hands, more experienced, and who knows how to coach in Test cricket.” But one thing is certain: we are in for an interesting ride,” he added.

McCullum’s T20 franchise coaching experience and friendship with skipper Eoin Morgan seemed to make him an ideal choice to coach the white-ball team. While there were reports of McCullum taking over the white-ball duties, he stated that the role did not interest him.