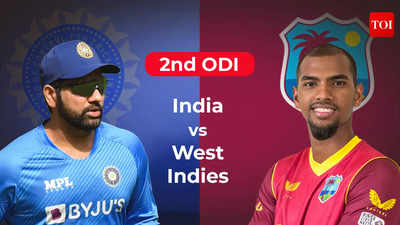 Prasidh Krishna grabbed four wickets in the second ODI against the West Indies, conceding only 12 runs in nine overs.

After emerging as the star performer with his brilliant bowling in India’s 44-run win against the West Indies in the second ODI. Bowler Prasidh Krishna said the high praise from his skipper Rohit Sharma was “extremely flattering.”

In the three-match rubber, the lanky Karnataka player set up India’s series-clinching victory, impressing his skipper.

During the post-match press conference on Wednesday, Prasidh made the following statement.

The spectacular stint of Prasidh. Who was named Player of the Match for his four wickets for only 12 runs in nine overs. Including three maidens, astounded Rohit. “For a long time, I haven’t seen a spell like that in India. Bowled at a fast speed and didn’t let up, “At the presenting ceremony, Rohit stated.

The bowler noted that he has been putting in a lot of effort to enhance his consistency, and that it has paid off. “As I previously indicated, I’ve been putting in the yards and attempting to achieve this for a long time, so I’m overjoyed that it’s finally occurred.”

I’ve been playing for India for about a year now. Since then, I’ve been working hard to improve my consistency,” Prasidh remarked at the post-match press conference.

“I remember being excited and having too many emotions rushing through my head when I first started,” he said.

India scored 237 for nine before dismissing West Indies for 193 in 46 overs to win by a comfortable margin. “As I previously stated, as a bowling squad, we have been working on consistency.

We all know we have a terrific group of bowlers in our squad. And we’re all assisting and learning from one another, so that’s basically it,” he said.