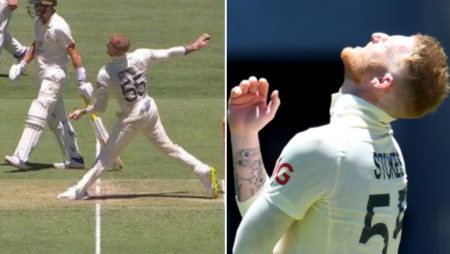 Ben Stokes: After injuring ben stokes knee during fielding, the star allrounder will be evaluated overnight.
After picking up an injury on a tumultuous second day at the Gabba, England’s medical staff will review him overnight.

When Ben Stokes chased a ball to the boundary in the 29th over, he appeared to injure his knee and was plainly suffering for the remainder of the day

Ben Stokes had bowled three overs in his opening spell. Including a no-ball wicket for David Warner, and two more before lunch, but just four more in the day.

Ollie Robinson, who had a fantastic day with three wickets. Including two in two balls to claim Warner and Cameron Green, left the field during the last session. And did not take the second new ball, but England bowling coach Jon Lewis said he was well.

“Obviously, Ben Stokes got hurt on the field today, so he didn’t bowl full speed at the end of the day. ” Lewis explained. “I believe our medical team will evaluate him overnight to see how he is doing. Aside from that, the guys are OK.”

Poor weather hindered both teams’ preparations. But while Australia only had to bat for 50 overs on the first day. The impacts on England’s bowlers were evident during the final session.

Ben Stokes: Joe Root was left with few choices by the end of the day. His issues were exacerbated by left-arm spinner Jack Leach being taken at over nine-an-over. In what appeared to be a clear game plan by the Australian hitters to put him under strain. He took Marnus Labuschagne’s wicket, but he couldn’t keep up with the scoring rate and was dismissed for five sixes.

“It won’t be one of his better days, and he’ll want to forget about it,”

“But, as I’ve said about the other people I know. Jack is a really resilient fella.” “We’re not out of the woods yet. Jack is expected to come back strong tomorrow and demonstrate the character I know he possesses.”